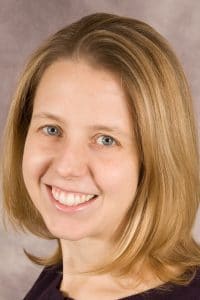 The College of Sciences has named Gail McLaughlin a University Distinguished Professor of Physics.

McLaughlin, who joined the NC State faculty in the Department of Physics in 2001, works in the fields of nuclear and particle astrophysics and of neutrino physics. Her work focuses on neutrinos in astrophysical environments and element synthesis. She is also known for her work on neutrino interactions during the formation of the rapid neutron capture elements, theoretical studies of the detection of supernova neutrinos, and neutrino flavor transformation in merging neutron stars.

McLaughlin has authored or coauthored more than 70 scientific publications and delivered nearly 200 invited talks, lectures and seminars. She is a fellow of the American Physical Society and a member of Fission in R-Process Elements, a Department of Energy topical collaboration; the Joint Institute for Nuclear Astrophysics — Center for the Evolution of the Elements, a Physics Frontier Center; and the Network in Neutrinos, Nuclear Astrophysics and Symmetries, a National Science Foundation hub. She has served on the editorial board for Journal of Physics G and chaired the advisory committee for the Institute for Nuclear Theory. She received an Outstanding Junior Faculty Award from the Department of Energy.

McLaughlin received her A.B. In physics from Princeton University in 1991 and her Ph.D. from the University of California San Diego in 1996. After graduation, she held postdoctoral appointments at the University of Washington and at TRIUMF, Canada’s national laboratory for particle and nuclear physics and accelerator-based science.