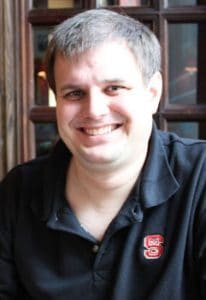 Paul Huffman, a prominent nuclear physicist who has been on the NC State faculty for more than a decade, has been named the new head of the university’s Department of Physics. He assumes his new role July 1.

Huffman has been with NC State since 2004 and is a professor in the department. He had been serving as interim department head prior to his permanent appointment.

As head of the department, Huffman will oversee academic, administrative and budgetary matters for 260 students and more than 50 faculty. The department, which celebrates its 100th anniversary this year, offers both undergraduate and graduate degrees and specializes in many areas of physics including astrophysics, computational physics, biophysics, nanoscale science, nuclear physics, and atomic and molecular theory. The department has prioritized diversity; no U.S. university has more women on its physics faculty.

Huffman’s research focuses on the study of fundamental symmetries using cold and ultracold neutrons. This includes the development of ultracold neutron (UCN) sources, magnetic traps for UCN in an effort to measure the neutron lifetime, and a search for the neutron electric dipole moment (nEDM). He has also been involved in the development of a neutron imaging facility for automotive fuel cells. He has authored more than 70 peer-reviewed publications and delivered more than 50 invited talks.

Huffman has a joint faculty appointment with Oak Ridge National Laboratory and serves as an associate director of the Triangle Universities Nuclear Laboratory (TUNL), a nuclear physics consortium between NC State, Duke University and UNC-Chapel Hill. He serves as the deputy federal project manager for the nEDM experiment and is also a member of the NC State Faculty Senate.