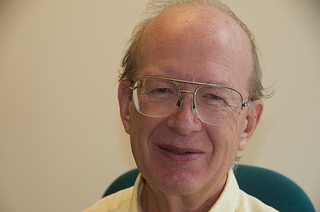 Professor Sherwood graduated in 1960 from Purdue in Engineering Science, spent a year studying physics at the University of Padova, Italy, on a Fulbright, and received his PhD in 1967 from the University of Chicago working in the Telegdi group on experimental muon physics. He lectured in the “Feynman” course at Caltech 1966-1969 and was in the Users’ Group headed by Tollestrup, doing particle experiments at Berkeley and SLAC. He was at the University of Illinois at Urbana-Champaign from 1969 to 1985, where he helped develop the PLATO computer-based education system, especially its system software, and created a PLATO-based introductory mechanics course. He worked on multilingual text-to-speech research and taught a linguistics course, and was an adjunct professor of linguistics as well as professor of physics. From 1985 to 2002 at Carnegie Mellon he was a professor of physics and senior scientist in the Center for Innovation in Learning. He joined the NCSU physics department in 2002 as research professor and distinguished educator in residence.

He and Professor Ruth Chabay are co-authors of the ground-breaking introductory calculus-based physics textbook Matter & Interactions, which incorporates 20th -century physics throughout and emphasizes the reductionist nature of physics. He is known for innovative uses of computers in physics education, including creation of the cT programming language and participation in the development of the 3D programming environment Vpython, an open-source project for which he is the gatekeeper. His seminal writings on work and energy in classical mechanics are frequently cited.