... we are working on updating this page

Diana Berman completed her NC State physics Ph.D., entitled “Physics of Electrical Current Flow through an Asperity in the Presence and Absence of an Adsorbed Layer,” under the supervision of Dr. Jacqueline Krim in 2012. She subsequently joined the group of Dr. Anirudha V. Sumant at Argonne National Laboratory, co-supervised by Dr. Ali Erdimer, in a seed program for postdoctoral fellows to study the mechanical properties of 2D materials. Dr. Berman’s creativity and hard work resulted in the establishment of a new program in tribology of 2D materials at Argonne National Laboratory. During her tenure there she was the lead author on a paper published in Science, as well as 7 other papers (with more than 400 citations) and 5 other patent applications. She joined the University of North Texas as an assistant professor in 2016. 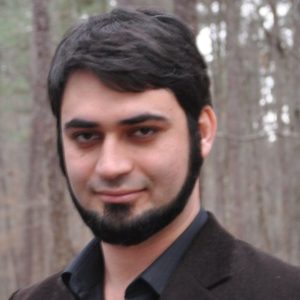 Mahmoud received his doctorate in physics from NC State in March 2011 under the supervision of Profs. Celeste Sagui and Christoper Roland. His dissertation was entitled “Free Energies, Transition Mechanisms, and Structural Characteristics of Proline-Rich Peptides.” After a postdoctoral position at he University of Illinois at Urbana-Champaign, he joined the University of Arkansas in Fall 2015 as an assistant professor.

Meng received his doctorate in physics from NC State in April 2014 under the supervision of Prof. David Brown. His dissertation was entitled “Generally Covariant Hamiltonian Approach to the Generalized Harmonic Formulation of General Relativity.” He is currently employed at Bloomberg in New York City.

John received his doctorate in physics from North Carolina State University in November, 2010 under the supervision of Prof. Keith Weninger. His dissertation was entitled “Detecting the Conformation of Individual Proteins in Live Cells Using Single Molecule Fluorescence Resonance Energy Transfer.” He is currently a postdoctoral fellow in the Center for Neural Science at New York University, where he does cognitive neuroscience research on memory in nonhuman primates.

Som received his doctorate in physics from North Carolina State University in December 2013 under the supervision of Prof. Laura Clarke and Jason Bochinski. His dissertation was entitled “Photothermal Property of Metal Nanoparticles and its Application in Polymer Processing.” He is currently employed at Intel Corp.

Kelly Patton received her doctorate in physics from NC State in August 2014 under the supervision of Prof. Jim Kneller and Prof. Gail McLaughlin. Her dissertation was entitled “Investigating Nuclear and Astrophysical Systems Using Neutrino Scattering and Oscillation.” She is currently a postdoctoral researcher at Arizona State University, where she works on neutrino production and oscillation in stellar environments.

Brian received his doctorate in physics from NC State in December 2003 under the supervision of Prof. Robert Nemanich (Physics, now at Arizona State University) and Prof. Angus Kingon (Materials Science and Engineering, now at Brown University). His dissertation was entitled “Nanoscale Investigation of the Piezoelectric Properties of Perovskite Ferroelectrics and III-Nitrides.” He is currently a senior lecturer in nanoscience at Ireland’s largest university, University College Dublin.

Read an interview with Brian about his experience as a graduate student in NC State Physics, how he got there and where he’s been since.