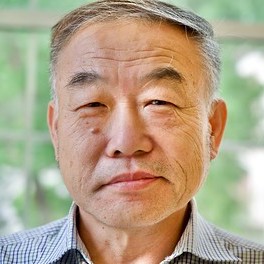 Professor Ji received his PhD in 1982 from Korea Advanced Institute of Science and Technology (KAIST) after getting MS in KAIST, 1978, and BS in Seoul National University, 1976, respectively. He joined the theory group of the Stanford Linear Accelerator Center (SLAC) in 1982. In 1984, he became a postdoctoral fellow at Department of Physics, Stanford University and was appointed as a research associate at Brooklyn College of the City University of New York in 1986. He joined the faculty of North Carolina State University in 1987. At NCSU, he was an assistant professor for 1987-1992, an associate professor for 1992-1997 and has been a professor since 1997.

Professor Ji developed a relativistic quark model motivated by the quantum chromodynamics (QCD) to describe the hadron structure and spectrum. He Pioneered the idea of connecting the instant form dynamics and the light-front dynamics and contributed to utilizing the light cone in solving relativistic bound state and scattering problems. He has also made chiral effective theory calculations to study the long distance scale QCD phenomenology as well as perturbative QCD computations of the nucleon, meson and deuteron form factors to understand the structures of hadron and a few hadron systems at short distance scale.

Other research accomplishments include an application of nuclear and particle physics to astrophysics and cosmology involving neutron star and dark matter.