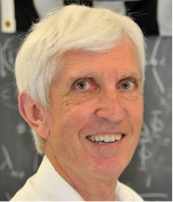 Chris Gould is an Alumni Distinguished Undergraduate Professor of Physics Emeritus. He taught at NC State for 45 years and previously served a decade as Head of the Department.  Later appointments included seven years as Associate Dean in the College of Sciences and a year as Interim Head of Biological Sciences. Following retirement in 2016, he took a two-year IPA position with the Office of Science, US Department of Energy, serving as program manager for the nuclear structure and nuclear astrophysics programs in the Office of Nuclear Physics.

He is a nuclear physicist by training, with interests in cosmology, energy research and policy, science education, and neutron and neutrino physics. He has a PhD degree from the University of Pennsylvania (1969) and a BSc from Imperial College, London (1965). He has held visiting appointments at Los Alamos National Laboratory; the Institut fur Kernphysik, Frankfurt; the Atomic Energy Institute, Beijing; the University of Petroleum and Minerals, Dhahran; and the Oak Ridge Center for Advanced Studies.

He is a Fellow of the American Physical Society; co-recipient of 2008 Presidential award from RTI-International “For outstanding contributions as an integral member of the Research Triangle Energy Consortium operating Committee“; and as a member of the KamLAND collaboration, recipient of the 2016 Breakthrough Prize in Fundamental Physics “For the fundamental discovery and exploration of neutrino oscillations, revealing a new frontier beyond, and possibly far beyond, the standard model of particle physics”.