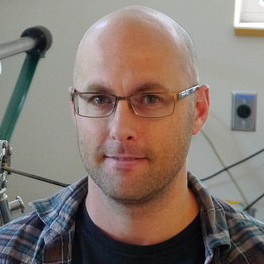 Professor Dougherty is an experimental condensed matter physicist focused on the study of solid surfaces, interfaces, and thin films. He earned his Ph.D from the University of Maryland at College Park and did postdoctoral research in the Surface Science Center at the University of Pittsburgh and in the Surface and Microanalysis Science Division at NIST, Gaithersburg. He started a new Surface Physics laboratory at NC State in 2008. At NC State, he was a founding member of the NSF Center for Molecular Spintronics and the interdisciplinary Organic and Carbon Electronics Lab (ORaCEL).

The Dougherty Research Group at NC State uses scanning tunneling microscopy, atomic force microscopy, and photoelectron spectroscopy as primary experimental tools. They are focused on characterizing the structural, electronic, and magnetic properties of surfaces and interfaces. Specific materials of interest include carbon-based materials (small organic molecules, polymers, and graphene) and their interfaces with metal and dielectric materials. The group's experiments provide new insights into the complicated and still mysterious quantum properties of condensed matter. In addition, the properties of interfaces studied by the group are of practical use since they often control charge injection efficiency from electrode contacts and carrier mobility in transistor channels.