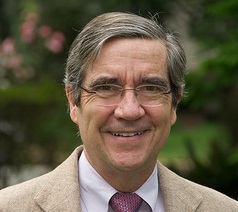 Professor Paesler earned his BA degree at Beloit College and his PhD from the University of Chicago in 1975. His PhD experimental research on disordered solids was undertaken in the laboratory of Hellmut Fritzsche. In 1976 he was a Guest Scientist at the Max- Planck-Institut für Festkörperforschung in Stuttgart, working with Professor Hans Queisser on the photo-Hall effect in crystalline gallium arsenide. Thereafter he assumed a position as a Post- doctoral Research Fellow in the Division of applied Sciences at Harvard University working with Professor William Paul studying hydrogenated amorphous silicon. Professor Paesler came to NC State in 1980 where he is now a Professor. From 1997 to 2005 he served as the Director of Graduate Programs. From 2005 to 2012 he served as Head of the department.

In nearly four decades in the physics department Professor Paesler's research followed a variety of paths. His early work on optical experimental studies of amorphous semiconductors morphed into spectroscopic studies of microscopic phenomena of interest to mechanical engineers. In that role, he joined the university’s Precision Engineering Center as it became the first facility on the Centennial Campus. Work there became more and more precise until the need to resolve sub-wavelength features led his program into the then-emerging study of near-field optics, or NFO. There, his team accomplished a number of experimental firsts in NFO research where the team designed and built near-field microscopes that provided sub-wavelength optical resolution. After several years in this arena, he spent a few years working with NC State paleontologists involved in a variety of paleophysics studies. A return to amorphous semiconductors followed as he developed a group that exploited x-ray absorption spectroscopy in efforts to understand and improve phase-change optical memory devices. This effort coincided with his assumption of the headship of the physics department. After seven years in that role, he concluded his x-ray research, stepped down as department head, and joined the NC State physics education research team. As a member of that team, he helped introduce electronic technologies, including smartphones, into instruction laboratories.

The following chronological listing of sample publications span the academic career of professor Paesler and represent examples of the various research efforts described above.