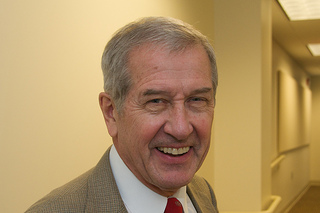 Raymond E. Fornes retired from his full-time role in 2011 as Professor of Physics and Associate Dean for Research in the College of Physical and Mathematical Sciences at North Carolina State University (NCSU). He served more than 41 years as a faculty member and nearly 22 years as Associate Dean for the College. Fornes also served as of Associate Dean of the Graduate School (1983-87) at NCSU. He also served as interim Associate Dean in the College of Sciences from 2015-2016. Fornes continues serving as the University Liaison to Oak Ridge National Laboratories (ORNL) and as the NCSU Counselor to the Oak Ridge Association of Universities (ORAU), roles he served for nearly a decade prior to his retirement. Fornes’ liaison role is to promote partnerships and collaborations between faculty at NCSU and scientists at ORNL as well as promoting the use of user facilities at ORNL by NCSU faculty.

Fornes’ primary research interest has been in polymer physics with emphasis on structure and properties of polymers and the influence of environmental factors on polymeric systems.
He has served as director or co-director of 24 Ph.D. students and 20 MS students. He has authored or co-authored more than 120 publications, has edited one book, and has been the recipient of numerous research grants and contracts. He has served as PI on grants funded by NSF, ARO, EPA, NASA, ORNL/DOE, among numerous others. He has been recognized at North Carolina State University as both an outstanding teacher and outstanding researcher. He received the Fiber Society’s Distinguished Achievement in Fiber Science Award. In the spring of 2008, The North Carolina State University Board of Trustees recognized Fornes with the Alexander Quarles Holladay Medal for Excellence in recognition of his outstanding career at NC State. The Holladay Medal is the highest honor bestowed on a faculty member
by the trustees and the university.

Fornes has been active at the national level in professional organizations and activities including: Sigma Xi, The Scientific Research Society, The Fiber Society, the American Physical Society, the American Chemical Society, and the American Association for the Advancement of Science. He has served on Boards of Sigma Xi and The Southeastern University Research Association, and Advisory Boards at Cornell University and Georgia Institute of Technology. Fornes focused much of his attention over the past three decades serving in roles aimed at strengthening the sciences at NCSU. As North Carolina’s primary Land-Grant University, the historical roots and strengths of NCSU centered around agriculture and engineering, with the natural and mathematical sciences playing largely a supportive role to those former
programs until the mid-1970s. Since that time NCSU has emerged as a top tier research intensive university, which required aggressive planning to build reputable science programs that complemented the historical strengths of the institution. For success to occur, the planning had to be followed by enormous investments in those areas. Fornes has worked at all levels within the institution, and often at the state and national levels to assist the institution in meeting its broader objectives.